skip to main | skip to sidebar

We made it back in one piece a couple of days ago and have been keeping firm ground beneath our feet and escaping the elements in Hotel Hain (until last night when part of the roof blew off). Thanks for your interest. We’ll try to post some photos and video as soon as possible- here is one clip that might get your attention. Anyway, in hopes of recovering some of the costs from the six hour zodiac ride out, we’ll probably hold off on posting our “best of” on the blog and save them to sell to Advil, Canadian Tire, and other lucrative outlets. Also, we’d rather be checking out different parts of Chile and Argentina in the couple of remaining weeks we have, rather than sitting at the computer.

Last night we did a slide show for about twenty local folks, many of whom were involved in helping us out, all of whom feel like old friends. If you ever need a connection down in Punta Arenas, we have it… We tried to convey the reality to them that we are just three guys who like the mountains- not some crazy “Everest is next” crew. I think they finally got that impression when they saw Kari’s tent photo exposé.

So yes, we spent a lot of time in the tent on this trip. The newspapers in Punta Arenas, which incidentally is in the rainshadow of the Darwin Range, said that there hadn’t been a period of bad weather like this since 1982, and people couldn’t walk to work because the rain was hitting them sideways for three weeks. Seems reasonably plausible to me, considering that during the first 25 days of our trip we tallied the total hours of sun to be eight, mostly behind some growing lenticular clouds. We then received two days of good weather, arriving in an untimely fashion however because we had to descend a 4000’ north-facing (sun-exposed) serac-laden chute the first day. We cleared that but then had to decide whether or not to continue with the ten or so days of food remaining (at a stretch). The good decision was to pull out, because the blog probably would have never been updated, ever. As it was, it took us a week just to get to a pick-up spot. It’s likely that we’d have needed a week at least of pure blue days just to get around the crux, if it was at all possible given the steep nature of the terrain. “Mellow” spots we looked at on the map mostly turned out to be fairly steep. That would be an understatement actually. So the apparently steep parts would probably have been a no-go, and we could have been pinned by weather in an area without escape. The whole range is mind-blowing and surely it will continue to get attention from climbers and skiers. Hopefully more Chileans. Anybody interested in 7000’ granite walls?

So we went to the elephant seal colony where (yes Ryan) we bonded with the seals- in fact I hope you all approve of Bertha here. I’m not sure whether it’ll be customs or immigration I’ll have to deal with, probably both…

There’s a lot more to tell- coming to a potluck near you. By the way thanks to Ryan, Jasmin, Emily and others for helping to keep track of us and especially to Ryan Gill for updating the blog here.

Stay tuned because I’m sure we’ll have some new postings in the next couple of weeks now that we actually have some information to convey, for example the 1800 “select” images and video from my broken camera, Kari’s artsy and telling shots and Dean’s video.

Steve and the boys 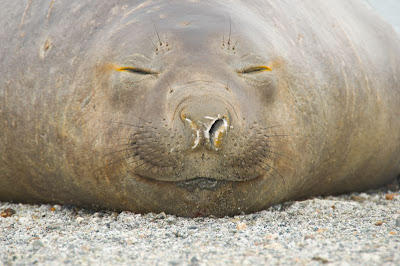 *Really* glad to hear that you guys made it out! What you've done is truly epic.

happy you're out so the epics will continue

Wow...I have lived vicariously through this blog site for weeks. What an epic adventure and even though you didn't make your goal you have all done a million times more than the majority of the world even dream about trying.