skip to main | skip to sidebar

Here's a sampling of Man in his element, or more likely, out of it. Let's not pretend each of us was raised by Inuit herdsmen, or wolves. It's tough being out there without a charged iPod or your email account. After five weeks you should have seen how fast we showered up and hit the new James Bond flick in Punta Arenas.

Below are some paired up photos of each of us in our element- or out of it. You decide: 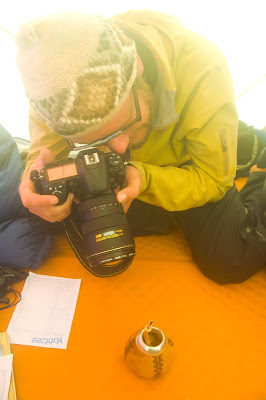 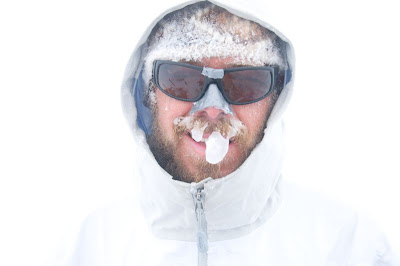 Medig going for that Nat Geo cover, also showing a "mixed climb" that formed on his face 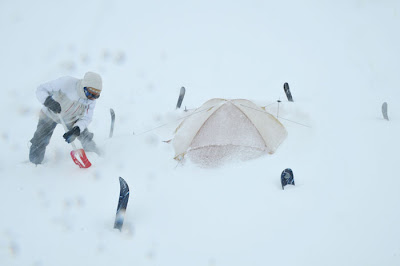 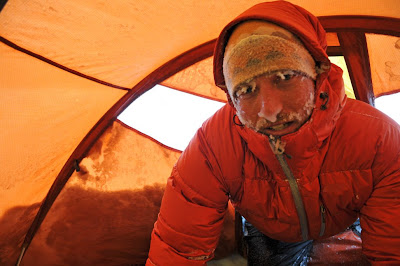 Ogle looking particularly gnarly and cool (really he was just digging a hole so he could squat to pee). 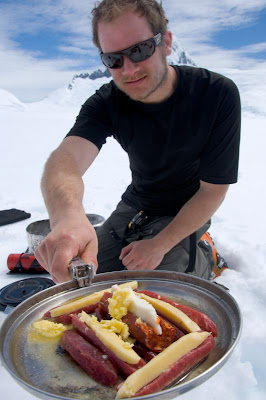 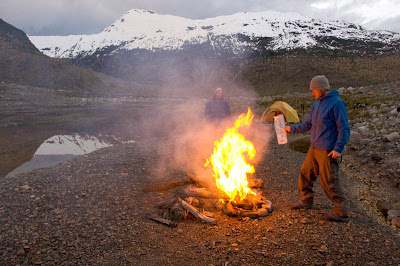 A matter of scale

They say size doesn't matter... but after five weeks of sharing a small tent with two large men (Dean and Kari are both over 6', what were you thinking?) you come to appreciate that a sense of scale can be misleading.

Basically there's no room in the tent. And the manly code dictates that you NEVER touch the guy beside you, under any circumstance. If you happen to brush against someone's leg you must give the obligatory gruff apology, as if you were cracking your knuckles or scratching your balls and you accidentally touched your ski partner. Faux pas!

Anyway, we're talking about the mountains here. It was outside the tent where the real sense of scale became distorted. Check out these shots of this one peak- doesn't even have a name- that rises about 1800m above the Marinelli Glacier. The first shot is the zoom in on the upper part and the second shot shows the whole meal deal. The third image shows the "Great White Chute" to the right of the frame, which is to the right of the aforementioned peak. The Chute doesn't seem like much but it took an entire day to descend. And the whole time we managed to do it without touching eachother! 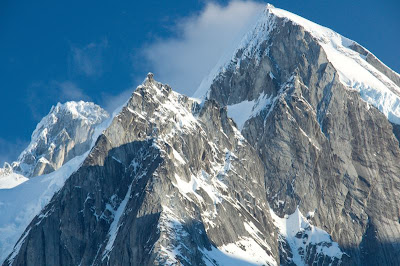 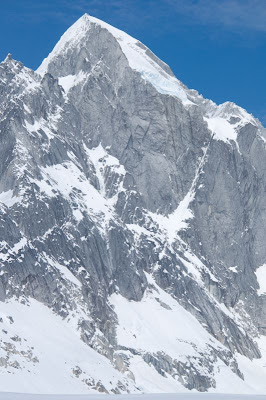 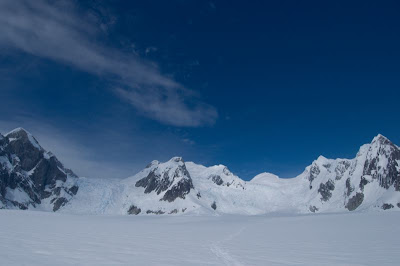 Now we can take a look at the lower Marinelli Glacier, nice and flat on the map. First shot is the Marinelli as seen from Dean's perspective near the top of the Great White Chute. Not flat. And it continues for ten kilometers. Second shot is us on the Marinelli Glacier a day later in a classic "get me the hell out of here" situation on Dean's birthday. He led the entire day and was quoted as saying "I don't know, this is kinda fun."

Incidentally, a cool feature of this glacier is how it pushes up against the nunatak (basically a mountain unto itself) at the middle top left of the second photo (the other part of the glacier flows off to the top right). The seracs push up about 400m vertical against the mountain-therefore we had to climb up to get down the glacier. Okay I'm not a glaciologist, just a skier. 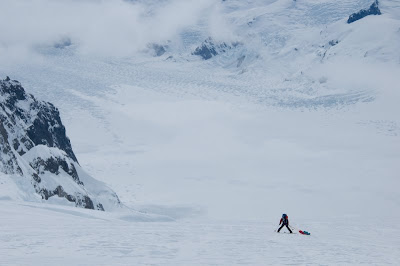 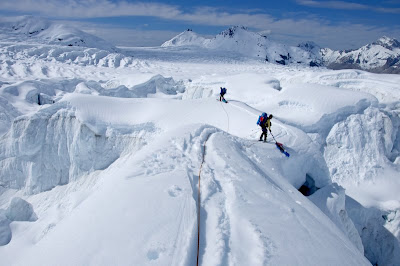